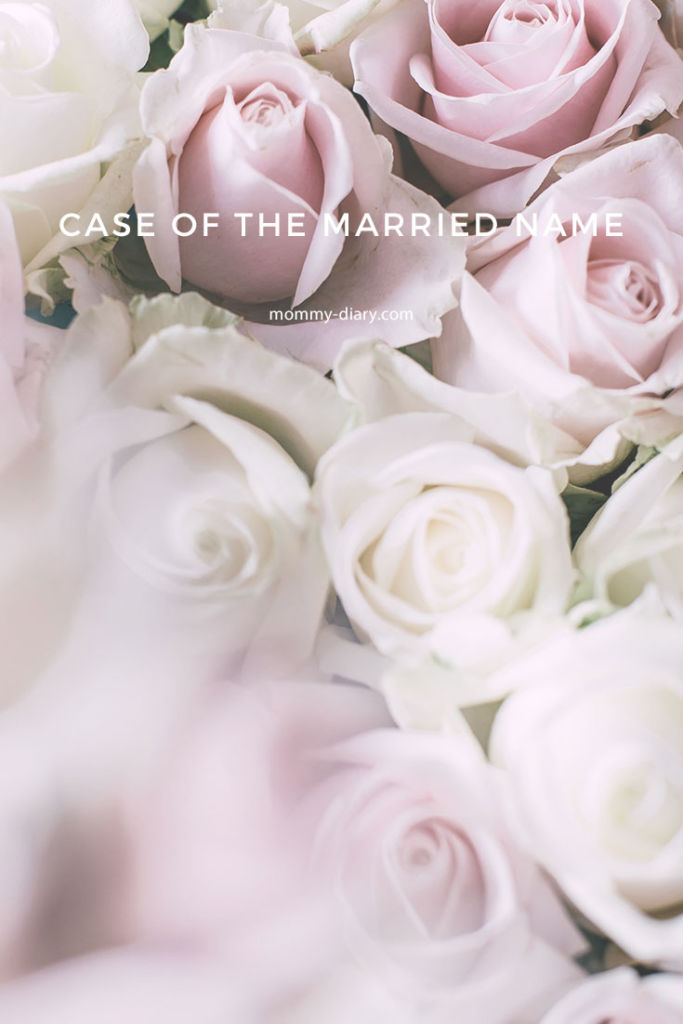 It took me NINE YEARS after marriage to change my last name. I know most women have no trouble heading straight to the Social Security office with their copy of freshly printed marriage certificates but for me, this was one of the most difficult and ethically & morally compromising decisions I ever had to make.

Why did it take so long? Well, I have several explanations.

1) I once defined myself as a feminist, before of course, I realized that the term feminist is demeaning in itself as it is a response to patriarchy. Ok, no need to be theoretical here but you get my point. I vowed I would never, ever let another human being (especially a man) dictate my life and/or my identity in any shape or form. And I was happy with my last name. It was what I was born with and I didn’t want to “lose” it. Plus it took me awhile to really feel like a part of this new family we’ve created. It took some time–nine years to be exact. (And I thought I was the type to adjust pretty well).

2) I was always prepared for divorce (in the back of my head). I realize this is a disturbing statement and I apologize to my husband (If you’re reading this, sorry honey not anymore!) – but I was always prepared to leave if something didn’t work out. Our first years as a 20-something-year-old married-couple-with-two-kids were rough so I always remained prepared (in the back of my head).

I once thought being prepared to walk away from a flawed marriage was a sign of courage & strength. Now I know no marriage is perfect, and forgiveness and unconditional love is the true sign of courage.

I must’ve changed it over twenty times. I was once Angela Kim, then changed back to Angela Lee (after a bad fight) then I’d feel bad, change it back to Angela Lee-Kim, then change it back to Lee (after another bad fight) and change it to Kim (once we make up) and back to Lee-Kim because that’s what I thought I wanted, but then it sounds funny because it’s putting together two very common Korean last names. It’s not culturally significant like Lee-Johnson or Lee-Gonzales. It’s Lee-Kim, like Kim-Lee, Kim-Chi.

So today, my name on Facebook (which nowadays seems more ‘official’ than my legal name) is stuck at Angela J. Lee because I’ve surpassed the limit to change my last name. I did it too many times and Facebook is asking me to send them a copy of my driver’s license or marriage certificate to change it, again. One day I’ll get around to it but as of now, Facebook knows way too many thing about me and it doesn’t need my Driver’s license on top of all this.

So I finally went through the hassle of legally changing my name long after my daughter started calling herself Tessa Lee-Kim as well. Then she began to ask why my last name was different, claiming she wants it too.  (She still loves and adores me and I hope it stays this way even when she’s 16.) It caused too much confusion and division within the family and well– I finally felt ready.

I walked into the Social Security office and my hands began to shake. No, I’m kidding. I walked into the Social Security office with my documents in hand and said good-bye to my maiden name once and for all. Good-bye maiden name, good-bye. Thank you for all the memories, it was nice being a part of you for thirty-something years. I spent 3 hours there, then another countless hours calling all the credit card companies and faxing in marriage certificates just so I can provide a sense of security and unity for my children.

Perhaps, somewhere deep inside, that security and unity applied to myself as well.

So for those of you married women who happily changed your last names immediately after the sound of wedding bells, I envy you. And for those of you who haven’t changed your last name yet, don’t worry- just wait until you feel ready. If you don’t want to, that’s fine too because how can the marriage culture make us do anything we don’t feel comfortable doing. It’s not a written law or anything; it’s simply a social construct that varies from one setting to another.

Case in point. If I lived in parts of Asia, changing my last name upon marriage would be culturally deviant. If I was a married woman in the Islam or Muslim culture, I would wear a hijab and cover myself at all times in public. A social construct is relative.

One last thing. Learn from my mistakes and don’t change your name so much on Facebook, unless of course, you want them to have a copy of your marriage certificate along with all those ugly, incriminating drunk pictures from the past that you somehow cannot untag yourself from.

One thought on “The Case of the Married Name”