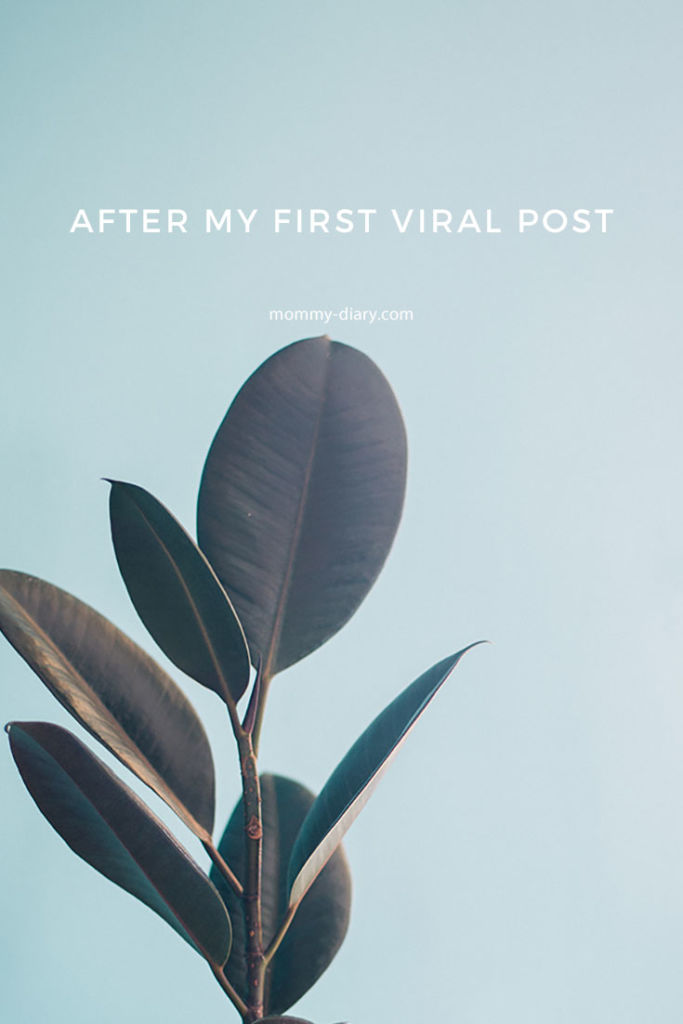 A few weird things happened to me this week.

First, a recent post I wrote after my daughter’s Taekwondo belt testing brought thousands of new readers. I couldn’t believe how much it was being shared and liked across the web. Had I known it would garner so much attention, I would’ve spent more time constructing each sentence and editing. Perhaps I would’ve thought harder about how it can be misconstrued and added a disclaimer. Heh.

Like many of my writings that somehow seem to take its own life after it is written, this too, was suddenly inspired by a real life event and I wrote it in one sitting. That’s the funny thing with writing you know, because the ones that seem to strike a cord with people are ones that are written in this way. A sudden inspiration comes, writing just flows, I submit publish, and it goes out there and finds its own readers.

You can’t repeat it. You can’t explain it. But it felt as if you were being guided.

As a writer, I’m always waiting for the big moment when the writing muses to come and play with me. It doesn’t happen as much as I’d like, but I’m always trying to get their attention by writing, writing, and writing some more. I want them to come and trust that I will not give up on them and have fun while we play. And to get there, I realize it takes hard work, dedication and hours of writing words that are only sometimes recognized and largely ignored.

This is why writing is such a lonely journey my friends, and I never thought I had the courage to actually go through with it. So instead, I decided to read and write about other people’s writings and talk about it for the rest of my life. (Hence, my original dream of becoming a literature professor.) But life happened, then children happened, and my childhood wishes became an implausible dream.

In sadness and discouragement I turned the corner and there she was- the writing muse, waiting to embrace me.

Recently, my blog readership has surpassed the level of my comfort zone. When I first began blogging publicly in 2014, I had a mild panic attack right before I hit “publish” on my very first post. I was scared that my writing was no longer a secret and worried about what friends and family might think. Now my life was open for interpretation and scrutiny by strangers and my writing became susceptible to misinterpretation, criticism and false accusations.

I still believe I made the right choice by deciding to write publicly. The secret blog I kept for 3 years was getting no where and frankly I became tired of talking to myself. I still believe writing is meant to be shared with others- or why else would the writing muses come visit you? So you can sit there and talk to yourself? Once the writing heals you, it is your job to go out there and use it. You don’t have to change the world or change even one person–but if it’s inspired by a force or an epiphany greater than yourself, the writing will find its own audience and do it’s own job.

And with public writing comes more voices- usually positive but sometimes negative. The loudest ones are the negative, critical comments because people rarely seem to stop to leave any voice unless they are angry about something. Heck, people don’t even seem to have time to leave Facebook and Instagram comments nowadays— a simple liking of a picture is our main mode of communication.

So with the sudden influx of traffic came a reader’s comment about my apparent self-victimization and disempowerment. He was upset that I see myself as part of a “victim group” and that I am perpetrating the same “victim mentality” onto my daughter. At first I dismissed it as some misogynistic and chauvinistic rant, but he continued to comment and you know– it actually began to make sense. I began to see what he’s trying to say, that females should NOT see themselves as victims, but as empowered individuals. They are not marginalized, as I indirectly claim, but rather, just as capable and powerful as anyone next to them.

And he went onto say the most people he admires are women, that he works with plenty of female executives who are not marginalized, that females who feel they are marginalized basically has deeply rooted issues from their childhood. Just like Blacks who see themselves as victims, he says such attitude is “unhealthy, misdirected, irresponsible and ignorant.” Then he said something very memorable, that movements like ‘Black Lives Matter’ is a scourge. Interesting choice of word by the way.

I get it– but I stand firm. Marginalization and discrimination exist in all corners of our society. I know not only through my personal experience, but through the experiences of others around me.

I learned something valuable from this reader. I realized the true value of empathy and compassion and that these are needed now more than ever. I once wrote an article about mental illness and indifference after the occurrence of the Virginia Tech Shooting, which was later published in a high school reader. This too, was written on a whim and I had no idea it would or can be published in a cultural text.

I’m now beginning to see a pattern. Whenever I feel the sudden desire to write something, when the writing muses come to visit and play, it is almost always regarding issues of silence, indifference and marginalization– issues that tap into deeper, universal emotions. And it almost always invokes a strong response from the readers.

Come to think of it, I’ve been saying this for a long time– that my passion lies in giving voice to the silenced, whether the silenced is a woman, a child, an ethnic minority, a disabled person or an abuse victim. The marginalized and weakened people come in all shapes and sizes and they are all around us.

And no, they are not “imagining” themselves as victims, they are often victims of their upbringing, surrounding and education (or lack thereof) and it is not their fault. Sure it’s easy to blame the victim and call it self-pity. It’s easy to dismiss someone else’s difficult reality or painful past as imagined and delusional.

But I will never be that.

The greatest societal ill today is not racism, sexism, violence, mental illness, etc. It is indifference.

It’s indifference to other people’s stories and pains, dismissing it as a form of “self-victimization” and “disempowerment.” It’s the refusal to see the world as how IT REALLY IS, simply because your life is okay. Or perhaps your life is not okay, and you use that as a reason to dismiss other people’s pains as imagined or contrived. I’m living, why can’t you? I’m empowered, why are you such a victim?

I don’t know how a personal reflection regarding Taekwondo and gender identity opened such a huge can of worms but I’m glad it did. This is the power and beauty of writing. We can use it to impose, attack or preach- or we can use it to express, embrace and connect.

My writing does the latter. And there is nothing anyone can say to make me not want to play with my writing muses. In fact, the louder the outside voices get, the longer the muses come and sit with me. Perhaps this is the trade-off, the burden and joy of writing in a public space, and guess what–I’m finally learning to embrace and enjoy this gift.